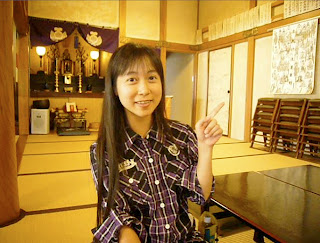 Here's the second and final part of our "Ryohoji & Toromi" article. Make sure to check out Part 1 if you haven't already seen it, lots of pictures! This time, we have an exclusive interview with Toromi herself, along with a surprise video message! Ryohoji head priest NAKAZATO Nichikou is also present after the jump, so make sure to read on! 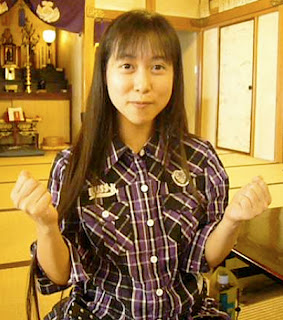 Toromi: I'm here in Nishi-Hachiouji, together with Mandi! Yoroshiku onegaisimasu-. Toro written in hiragana, Mi written "beauty", makes Toromi!
DnS: Up until now you've worked on singing, manga, cosplay, as a seiyuu, and many other things. Are there any new challenges you'd like to try?"
Toromi: Ehh--?! Something I haven't tried yet... Ummmm... Well.... I wonder... I can't think of anything off the top of my head.
DnS: Sorry, it's hard to think about it on the spot, isn't it!
Toromi: Saying I want to go to America would be the obvious thing to say, wouldn't it? Something more original would be more interesting... Well, I guess I'd like to go to America and do a live concert~!

DnS: Have you ever been overseas before?
Toromi: Outside of Japan, I've been to Hawaii in America, been to Saipan, been to Italy, after Italy had to stop in Holland briefly due to a strike, but I was able to enjoy it fully in one night. I went to an art museum, on the way I got a hot dog. Unlike Japan, the hot dogs are soft. Then on my return flight, we had to stop in Russia, and somebody went missing and we got held up, it was a little scary! Russia was really cold. It was September or October, up until 9 or 10, the sun was still up, that was surprising. Hm, was that right? Yeah I think so.
DnS: Is there any country in particular you want to go?
Toromi: Like I said, it'd be nice to go to America and do a live, but also I heard France has a pretty strong interest in anime, I really wanna see that in person. And since I'd be there anyway and Europe has a lot of countries close to each other, I'd like to migrate all around, but rather than just for fun, I'd like to be invited to do some work there~ 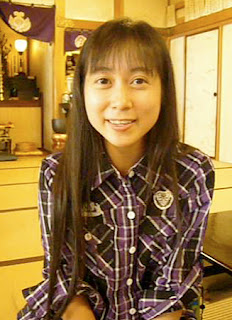 DnS: The Ryohoji Theme song CD is a collaboration with IOSYS. Did you get to meet them in person?
Toromi: Yes, I did. Lately, a lot has changed in the Japanese music & CD scene, and rather than renting a studio, often you go to someone's house where they've set up their own studio. It's becoming considered more fancy to record at a studio. So I went to the studio at their house with ARM and Ayu. I was really surprised. We had actually met before several times at lives, but neither of us remembered each others faces, so it was like "Nice to meet you, I'm ARM." "Nice to meet you, I'm Toromi...huh? Did we meet? Now that I think of it, we met during lives and radio..." We had a conversation like that.
DnS : What do you think of the term "Denpa song"? Do you think it has a negative connotation?
Toromi: At first, the term denpa song had a really malicious meaning, didn't it? Like, "I don't get what this person is saying," or "They have to be crazy!" And then, that bad image got more and more cool, which is pretty common. So actually, I'm very happy I was singing it even back when it was considered bad. 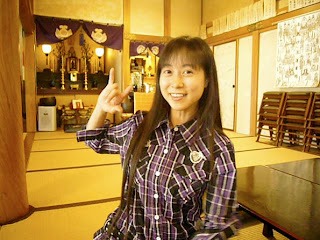 DnS: Finally, do you have a message for the readers of Denpa no Sekai? 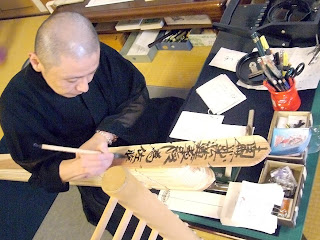 DnS: When did you first meet Toromi-chan?
Nakazato: When I met Toromi... it was a little over a year ago.
DnS: Why did it become so Toromi draws the mascots and such for Ryohoji?
Nakazato: At first, I just wanted to make the guide sign, but Mitsui-san happened to be there. He said we should make the kind of sign a lot of people will come to look at, so he introduced me to Toromi. 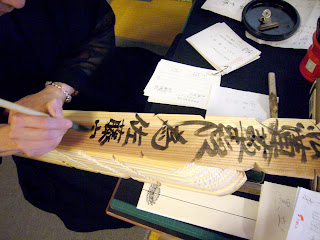 DnS: Since then, have a lot of people come compared to before?
Nakazato: Yes, a lot of people have been talking about it on the internet, and lots of young people came to look at the sign.
DnS: Do many people come from other countries?
Nakazato: Yes, like Australia, France, Singapore, other Asian countries...
And that's it! We hope you enjoyed the coverage of Ryohoji. Look forward to more and more coverage straight from Japan!
Posted by mandichan at 17:17