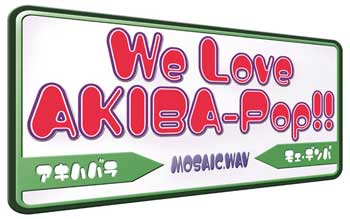 Well, there you have it folks. MOSAIC.WAV, IOSYS (despite being based in Hokkaido-ken), 桃井はるこ, DENPA party, the NicoVideo MAD community and so many others (eroge studios, maid cafes, anime and manga creators) have left such a marked impression on their Japanese peers this year that publishing authority 自由国民者 has ranked the term "Akiba-kei" #8 out of the top 60 most popular words/terms of 2008.

The always interesting Pink Tentacle blog did a fantastic translation of the list that you should check out in any case. I'm particularly fond of the whole おバカキャラ trend; bring on more of them, I say. This is awesome news in and of itself, but with the way these things go, the term could just as well find itself on the list of "top annoying words of 2009"... oh well, glory be to akiba-kei and may 2009 prove just as profitable and eclectic.

LOL, yes, just like the word "otaku" is always thrown around without regards to its content. Still, I don't think anyone would misunderstand the meaning of akiba-kei... But then again, the internet never fails to amuse.

Lol at the obaka-kyara, sounds cute. Well I guess only idols could pull this off especially if they're super cute, I can't imagine guys doing this :P

Thanks for the link, it's an interesting read so far. Oh the Japanese never cease to amaze me.