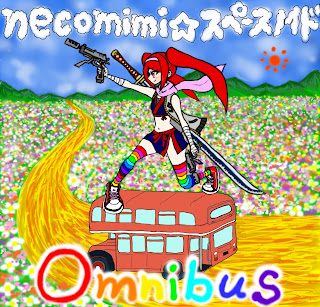 Japanese doujin and indie music can be frustratingly difficult to track down outside of Japan... but worldwide denpa listeners rejoice! Necomimi☆スペースノイド (Necomimi☆Spacenoid) has decided to share their amazing first album, "Omnibus" with the whole world via Bandcamp!

Necomimi☆スペースノイド has a unique sound which is enchanting while also slightly off kilter. Combine that with cute vocals and engaging lyrics, and you can an album I couldn't help but loop again and again. You will find a variety of inspiration from different sources on this album, from 80s pop music to sci-fi stories. The lyrics vary from sad to silly to mixed up German/Russian/English, all of which are highly enjoyable. (Although not included on the album, gamers will also want to check out their cover of Pollyanna (I Believe in You) from Earthbound / Mother!)

Originally, their vocalist was none other than one of my favorite idols, 森永まみ. Sadly she left the group before I got to know them very well, though I had liked what I heard and stored their name in my memory banks. Much to my surprise, at M3 2012 fall, I stumbled onto the announcement of their album release - with 2 new vocalists - just before the event, without much time to promote them here on Denpa no Sekai. I have a feeling many denpa fans out there might have overlooked this album due to the lack of promotion, so I am extremely happy it's available for all to download now. After purchasing the album, any doubts I had about replacing Mamipyon were forgotten - the dual vocals are a perfect match for the music, and the arrangements improved since what I had heard of the previous versions.

(Live video from when 森永まみ was their vocalist) 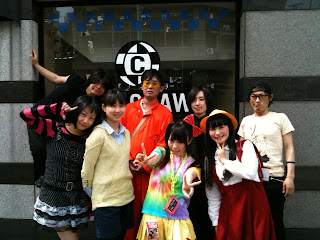 (Another shot of previous members)

Unlike what we are used to with most denpa groups, necomimi☆スペースノイド has a full band with 6 members: ちょこ (Choko) and ましろ (Mashiro) on vocals, 高開 洋 (Takakai Hiroshi) on keyboard, 武井 慎也 (Takei Shinya) on guitar, 斎藤 ぴよんこ (Saitou Pyonko) on synthesizer and chorus, and mastermind 飛鋭78式改 (Hiei Nanahachi Shiki Kai) on talkbox, vocal, chorus, programming, and song writing. I talked to Hiei on twitter, and he is always very happy to receive any feedback from anyone in any country, so he was eager to release the album via Bandcamp when I suggested the idea to him. He didn't get much response to the M3 release, so if you like it, feel free to let him know! 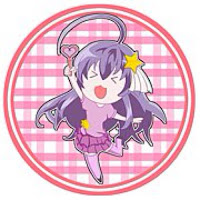 However, he's not the first member of the band I had contact with: at the last 電キュン (Denkyun) event after party, a very sweet and cutely-voiced girl sat next to me and we began to chat. After I mentioned I liked Mamipyon and necomimi☆スペースノイド, she got very surprised - because she was ちょこ, one of the vocalists!! She has an amazingly cute voice, on top of a genuine interest and passion for denpa music. Definitely a singer to keep your eyes on. Besides necomimi☆スペースノイド, she has two active projects: One is her anison cover band, "DEM P@roject", which as you might have guessed from the name, focuses on denpa and moe anime music. Follow their twitter for the latest info, or you can you follow ちょこ on twitter or check her blog too! latest info. I saw them live on 5/3, and it was a blast! The set list included favorites new and old, and anime and game music too. Their next live is coming on on 6/9 at 代々木labo! More info coming soon!

And although we already posted it on twitter, don't forget, she also participated  in an album at M3: 「勝手に主題歌歌ってみたvol.1」, which features new completely original opening songs for existing anime. Her track, which can be heard on the website, or embedded below, is a positively rockin yet denpa, cute yet wild, unforgettable number that makes you want to get start head banging.

Hopefully, necomimi☆スペースノイド will start a trend of international online releases, so if you like what you hear, please support them... and not just them, but any artists you like, let them know people out there in this wide world think they're flippin awesome!!

thanx for writing about our band!
I put an Japanese traslation of this entry and additional contents about this band small history and comments about each song.
http://hiei-type78m.hatenablog.com/entry/2013/05/04/224513
check this out!
(sorry, it's Japanese only)

I hope Bandcamp gains popularity in Japan sooner rather than later. I'd love to be able to actually buy all the doujin albums I've liked or am interested in.

I wonder how many groups realize they have a decent number of fans overseas?