LIVE A LIVE - Live report for アキバ大好き祭り and マーベルエール単独公演 Vol.2

Hey guys, Mandi here. For a long long time I've been meaning to write reports of concerts and events on here, but every time I simply take too long and never finish writing until the event is so long gone, no one would care anymore. Well, I'm gonna try and change all that now by TRYING to keep things short and sweet. So, sorry if I don't have complete set lists or tons of photos every time. I tend to write a lot so the articles might still be kinda long, but I'm just going to focus on my highlights and forget the small details. I hope you'll like reading my impressions on different events and get a little taste of what it's like to attend them anyway!

Akiba Daisuki Matsuri is becoming an Akiba tradition, taking over Bellesalle for 2 days in the summer with vendor booths, shows, robots, and of course lives and idols. I attended this time mainly to see Toromi, Metropoly V and Momochi Minami on MC. Ryohoji also had their own booth where you could buy Toromi's CDs and Ryohoji's various goods. 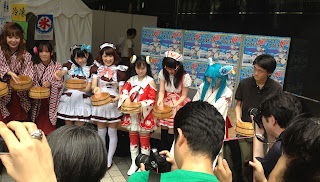 When I first arrived, Toromi, Metoko, and a bunch of Akiba maids from various cafes were perfoming uchimizu to much fanfare, with tons of photographers swarming about. (Mini video here.) 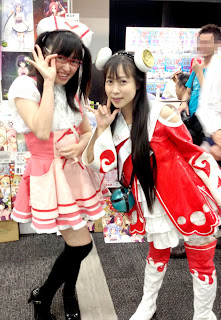 First up was some members Backstage Pass, and I noticed back stage Momochi Minami (Who was the MC for the event) was dancing along with them. Officially Momochi is a member of Backstage Pass too, I wish she could have performed with them. Towards the end, two of the members broke out into otagei to show their Akiba pride which was pretty cool. Once their part was done, most of their fans left, leaving the audience much smaller for Toromi up next, unfortunately.

Toromi once again performed along with Metoko instead of Kikouden Misa, but I love Metoko so either way I'm happy. Lately Toromi is super busy not only with her manga, but also with the Ryohoji cell phone game available on android and iOS, so she doesn't perform live much anymore. I was really happy to see her on the stage once again. They started out with 如来16, then なむ×きゅん and finished up with 寺ズッキュン！愛の了法寺！, a pretty typical set list for a Ryohoji themed performance, though a little short. While Toromi was bonking people's heads for 如来16, Metoko decided to bonk some people with her syringe. When she bent over to bonk me, a bunch of ultra orange glowsticks spilled out of her bag and off the stage! She scrambled to collect them and couldn't figure out how to get back on the stage at first. It was pretty funny. Needless to say she gave up on anymore bokusatsu for the rest of the live! 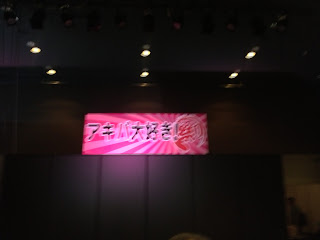 (Yes, this was the best photo I could get of the stage!)

As for the lives themselves, most of them were very cute and great dancers, though not exactly my thing. A strange thing to note was how few of them were based in Akiba. WE LOVE even came all the way from Nagoya! Speaking of WE LOVE, they performed some pretty awesome acrobatics. The fans cleared a big runway through the venue, and one of them got off the stage and did crazy hand flips all the way through the crowd. Gotta admit, that was pretty impressive!

After it was all done, Momochi tossed some candy she keeps stowed away in her hair decoration into the crowd, and I got some, woohoo! (A guy caught it right in front of my hand, but then gave it to me anyway! How kind!) 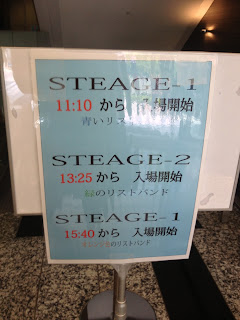 By the way, unknown to me at the time, the whole event was live broadcast on Youtube! Plus, the live itself is uploaded in full  in glorious (??) 240p along with lots of other stuff from the festival. If you just wanna see Toromi, skip to about 1:37:00 in the video! (By the way, I stood right near the camera man, yet was mysteriously not captured on film at all. Whew...) 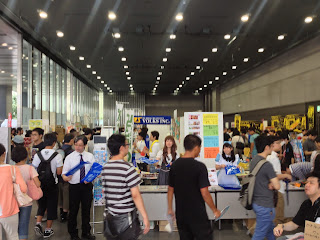 Another terribly blurry shot from me, but you get the idea! 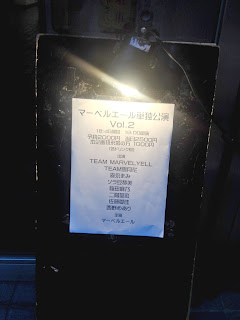 As most readers are probably aware of by now, I'm a big fan of idol 森永まみ (Morinaga Mami), and by association, support the company that produces her, Marvel Yell. Recently, Marvel Yell started a new series of independent lives. Usually their lives focus on lots of varied performers and collaborations, but these lives focus solely on their own idols, and are great for their fans as they cover songs of other Marvel Yell idols, past and present. Not only is the event reasonably priced, you get a discount on your first visit, and a point card to gain free photos and other goodies with the more you attend.

This was only the second time they held this event, and my first time attending, so I got a nice discount. As usual, the crowd was super fun, and the idols delivered various kinds of performances with lots of variety. The performances were split up among all the idols so they only sang a couple songs each at a time, allowing them to return again with costume changes. The scheduling of the event can't go unmentioned - on the same day as the huge idol festival TIF, which Marvel Yell was turned down from. It was nice to see their fans chose this event over the larger one.

Of course for me, the highlight was Mamipyon's performances. Her group numbers were great, and her covers were 椎名セイカ's 夏色エール (Natsu Iro Yell) and a slow song by Sakuragawa Himeko (Sadly I forget the name of the song! Forgive me! I warned you these reports aren't gonna be perfect!!) Her solo songs were the hot blooded 「16才」 and her signature number 「トルネード」.  However, her best highlight may have been her comedy performance. She performed an absolutely hilarious skit about trying out to be a mahou shoujo. Definitely her best comedy skit yet that I've seen. Check her blog to see her outfit from the skit as well as her other costumes. 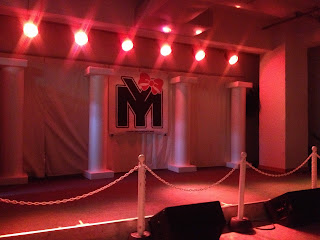 As usual for a Marvel Yell live, the stage was decorated nicely.

There were 2 new performers, 西野めあり (Nishino Meari) and 佐藤愛佳  (Sato Manaka). Sadly, they both must have gotten a little too nervous during their debut and forgot the lyrics pretty badly, with Meari even asking for a re-do and starting again from the beginning. As expected, the crowd was still very supportive. Honestly, considering they both had the same problem, I'm more likely to question their management than their skills. I wonder if they were given adequate time to practice? Anyway, I'm sure they'll get better with time.

Next to Mamipyon, my favorite in Marvel Yell is probably ソラ豆琴美 (Soramame Kotomi) aka Kotomyu. Calling herself 「アキバのうたのおねいさん」, she always delivers a cute and fun performance, and I love her song 「いっしょにあそぼ♪」, though she didn't perform it this time. At one point in one of her songs, all of the fans back up to the back of the venue and then dash the stage. One of my friends shocked me by doing a forward flip and rolling to the stage instead of running! What made it even more hilarious was Kotomyu mimicked him and did an awkward half roll maneuver on the stage. I just love that free and fun atmosphere. 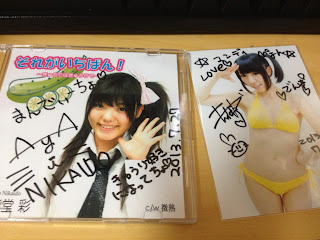 Mamipyon photo was free with pre-registering for the live, plus Kyuuri CD.

The main MC for the event was the always hilarious 二階堂彩 (Nikaido Aya.) Her obsession with cucumbers causes the crowd to break out in green colored lights. She had a new CD focusing on her love for cucumbers called 「それがいちばん！～きゅうりはきゅうりで～」. The title just sounded SO denpa, I knew I had to buy it, even though she didn't sing it during the event. After listening to it at home, I have to say, it is pretty denpa, but her deep voice isn't what you usually hear in denpa songs, so it feels kinda different than I expected. Her voice is probably more suited to cool songs, even though her personality is more on the silly denpa side.

After the live was over I got to talk with Mamipyon and get her to sign the pre-reg bonus photo. Sadly the CD I wanted to buy was out of stock, but they said they'd bring it next time. I also got Nikado Aya's autograph and talked to her for a bit, she seemed a little disheartened when I admitted I didn't really care for cucumbers, so I told her I'd try to get used to them. (This is true though, I really am working on it!!) She said she had heard about me from Mamipyon which was nice.

Ok, that about wraps things up! Hope you guys enjoyed it, look forward to more live reports in the future!

Great work!!!! I hope you finish up on your previous ones as well. We ALWAYS care no matter how long it takes you ;)

As for me, I'll be coming up with the C84 coverage shortly.